When it comes to career highs and lows, many of us obsess about the troughs and skim over the crests. But if we take the long view — seeing these ups and downs as recurring patterns that are neither good nor bad — we can better manage our response and accept the inevitability of change. I try to think about the difficult times as an opportunity to learn. I’m not always sure what I’m supposed to learn, but by being open and curious, in time I figure it out.

At one point in my consulting career I was working on two all-consuming projects simultaneously. When they were completed within a week of each other, my relief quickly turned to shock: I had no other work, no projects in the pipeline, and no income for the foreseeable future. I was so busy with those two projects I had neglected all my business development activities. Big lesson there! It took almost five months to re-build my business pipeline.

But I took advantage of that trough to pursue professional development and training opportunities. In fact, during that time I attended a coaching program that fundamentally changed my business model and influenced the kind of work I would do in the future. Without the time to reflect and re-tool I would not be enjoying the business I am today. What I had thought was a career low point actually laid the groundwork for a better service offering for my clients and more fulfilling work for me.

Reflection is critical to make the most of work’s ups and downs. When things are going well, don’t just revel in the exhilaration. Ask yourself, “What is the reason things are going well?” Don’t assume it is because you’re awesome. Market conditions, industry trends, business connections, and serendipity — just being at the right place at the right time — can play a role in aligning opportunity and your intention. Make sure you consider those elements when analyzing your success.

When things aren’t going well, ask yourself what may have led to the situation and what you might have done differently to avoid it or lessen the impact. Ask others how they handled similar situations. Figure out what you can learn from the experience and what other opportunities may have opened up because of it. Get a coach to help you gain perspective.

No matter where you are on the rollercoaster, there are things you can do to make the most of the ride.

When your rollercoaster car is on an upward climb, all you see are beautiful vistas. Maybe you’ve started a great new job or a new boss has given you a project that’s right up your alley. Before the bloom fades, write down what you’re enjoying about your current situation and how it came about. Later, when the rollercoaster has reached the top and things start to go downhill, you can refer to your notes and understand the course better with a dispassionate view. This can put you in a more appreciative and less anxious mindset. When we are more appreciative, we can find solutions and build stronger relationships based on thoughtful analysis not sudden turmoil. 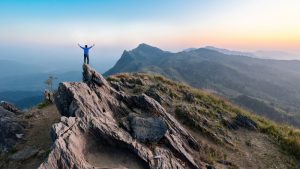 Amy was enthusiastic when her new boss arrived with strong credentials. But just a few months later she complained that he was slow to make decisions and her projects were suffering. I asked her what she had liked about her boss in the beginning. She said she appreciated how thoughtful he was and that he was hands-off with her projects. It dawned on her that what she had liked about him was now irritating her. When I asked what she might do to be less frustrated, she realized he trusted her to move ahead with her projects without waiting for his blessing. And when his input was important, she would remember to build in more time for his review.

The view when the rollercoaster approaches the bottom is often uninspiring, especially if you linger there for a while. But this probably isn’t the first time you’ve been in this position. In reflecting on previous lows, think about how you managed them in the past. Were there people or resources that were particularly useful then and may be available for you to draw on today? Are there opportunities you had ignored while you were enjoying the highs? We tend to forget the hard times when things get better, but a lot of learning can take place during those times. 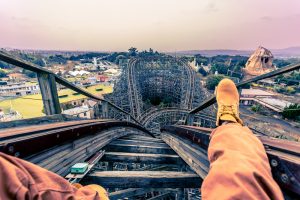 Richard was reeling from the third leadership change at his organization in two years. With each change, priorities shifted and his team was redirected. His strongest engineer left after the second leadership change when his project was put on a back burner. Now Richard was thinking it was his time to go. He liked the organization and his department had been successful in launching new products, but the constant change was becoming too stressful. I asked him to talk more about the stress he was feeling. He said he liked to be in control and every time leadership changed, he felt like he was starting over and had to prove himself all over again. I asked whether changing jobs would also require him to prove himself and he conceded that it would. He realized that he had an important advantage at his current job: the support of all the senior leaders. Right now he only needed to win over the new CEO. If he changed companies, he would have to win over many more people. Richard decided to persevere and devote more time to keeping his team motivated.

Not everyone enjoys rollercoasters, but if you keep the journey in perpective – reflecting on the experience and learning what you can along the way – you will be better prepared  to take advantage of every twist and turn. 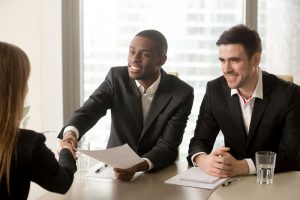