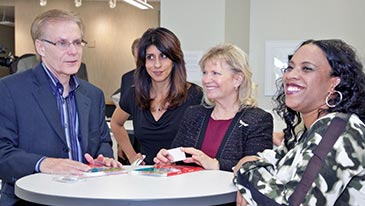 An executive team hired us to improve the effectiveness of their monthly meetings.  We observed that the team spent the majority of their time on tactical issues.  They realized that this behavior was limiting their ability to grow the organization.  With our coaching, the executive team changed from being mostly tactical to thinking strategically. Another observation revealed that if the CEO presented an idea, the other executives never presented alternative theories or questioned the idea.  As a result, the CEO wasn’t benefiting from the expertise of his team.  By suggesting different ways to surface ideas, gain feedback, and address problems and issues that engaged the entire team, we were able to broaden the team’s thinking and increase their ability to present options.  This resulted in a vision that allowed the organization to grow and sell the company in two year’s time.