As if work isn’t stressful enough, imagine having a co-worker, direct report, or boss who views work like it’s the Hunger Games: a brutal, fight-to-the-death contest with only one winner who allows their own teammate to be sacrificed.

Over the years I have seen several reasons for this attitude, but they all tend to stem from either personal or organizational influences.

On the personal side, people who are overly ambitious, competitive, or have a scarcity mindset — the fear they may never have enough — can embrace a Hunger Games attitude. They may have grown up in a family where competition was encouraged or are simply aggressive by nature. In school, they may have played competitive sports, run for class office, or joined the debate team. And as they move into management positions, they may continue this behavior by competing with other teams instead of collaborating, setting up win/lose scenarios for team members, and giving the same assignment to multiple people to see who does it fastest or best. Even people who are natural collaborators realize they must change their behavior or lose out when this person is in charge. 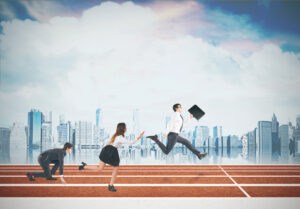 But people don’t have to be in leadership positions to wield this attitude. A team member who is critical of their colleagues and direct reports, puts others down, doesn’t share information, and takes credit for work the team did even when they had nothing to do with it may be driven by a winner-take-all mentality.

Organizational causes of hyper-competitive behaviors include disproportionately rewarding individuals instead of teams and adhering to a strict up-or-out policy, despite fewer opportunities for promotion at higher levels. In many organizations, employees at each level are assessed using a bell curve where roughly 15 percent are top performers at the right side of the curve, 15 percent are poor performers at the left side of the curve, and the bulk of employees make up the hump in the middle. The higher salaries and bonuses go to the top performers while the bottom performers may be asked to leave. The churn continues every year as employees fear falling into the bottom 15 percent and look at each other as their competition.

One client, Frank, has a boss who takes credit for his work. Rather than elevate Frank, she describes him as a great executer but says that without her strategic vision he would be lost. Frank does have a strategic mindset — he has made big changes to his organization and turned around an underperforming team in less than six months. But he gets little opportunity to show his skills because his boss doesn’t bring him to senior staff meetings and requires that he copy her on any communication with other leaders. Frank doubts that his boss will support him for promotion since his work in her organization is making her look good. If Frank can’t get out from under his boss, he will go to another organization, and they will lose a strong leader.

How to Stop Playing the Hunger Games 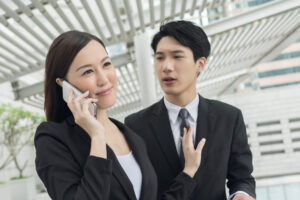 People at all levels and in all roles in an organization can help put an end to a Hunger Games mentality. Leaders and managers are especially key to combatting this culture, and they can achieve it by letting all their stars shine. They should ensure that everyone gets an opportunity for plum assignments and recognition for work well done. But they should also recognize that not everyone is motivated to move up — some want challenging work while others want a happy team atmosphere.

Favoritism can be conveyed when managers and leaders socialize mostly with a select group of employees, so it’s important that they pay attention to their behaviors as well as words.

Khelan managed a high performing IT team of five men and three women. They all got along well and were supportive of each other. To enhance morale, Khelan invited everyone to a weekly poker night at his house. Most but not all the men participated, and only one of the women attended. She wanted to play but felt uncomfortable being the only woman, especially when the men started drinking and smoking cigars. What Khelan thought was a good idea at the time ended up making people uncomfortable and his poker nights got the reputation for being composed of the “in-group.” Good intentions don’t always lead to good outcomes.

Leaders and managers should speak directly to people who undermine others, letting them know such behavior will not be tolerated. Jeanette noticed that Lilly, who reported to her direct report, kept wanting to meet with Jeanette. In the beginning, the two would meet and discuss various topics unrelated to the job. Eventually, Jeanette noticed that Lilly criticized other team members and often mentioned how exceptional she was. Jeanette explained to Lilly that she most appreciated team members who saw the best in others and helped others become successful. She felt she was giving Lilly the wrong idea and sending the wrong message to Lilly’s teammates. When Jeanette began meeting with all of Lilly’s peers, Lilly stopped being critical of others.

Managers can nip this competitive behavior among junior staff members in the bud by making sure they are engaged and challenged. When people have interesting and meaningful work, they don’t have time to go after their peers or bosses. 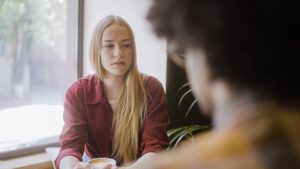 Peers and team members also play a role when someone is taking credit for others’ work or not working collaboratively. Before elevating the concern to a manager, a peer should have an honest conversation with them. If they were unaware of what they were doing, they will appreciate that the issue was settled without a manager intervening. But if they refuse to admit any wrongdoing, the peer should ask their manager for advice. If a peer won’t willingly collaborate, it may be possible to negotiate for a desired outcome. “If you want X from me,” one team member might say, “I will need Y from you.” This arrangement isn’t ideal of course, but it may eventually lead to more collaborative behavior.

The only good thing about competitive peers is that the attention they crave reveals their tactics and can ultimately undermine them. Sharon was asked to be on a board for a financial technical organization. Her strategic skills were something they sorely lacked. At the first board meeting, she and another board member had lunch together. Sharon shared her ideas about how the company could be more successful if they updated their strategic plan, focused in a more intentional way, and clarified how they were different from their competitors. Her colleague agreed. When the board meeting reconvened, Sharon was shocked to hear her colleague present Sharon’s ideas as if they were his own. Being new to the board she wasn’t sure what to do: she might come off as petty if she pointed out to the group that those were her ideas. And she was pretty sure her colleague wouldn’t be open to a conversation about taking credit for her ideas. She decided the best course, for now, was to keep her good ideas to herself. She took some comfort knowing her “hunger games” colleague runs the risk of being unable to explain her ideas if other board members ask him to expound on them. She of course would be happy to address their questions.

When direct reports don’t receive the recognition or visibility they deserve, they have few options that won’t make their boss look bad, which only rebounds badly on them. Many organizations do anonymous employee surveys which have the potential to weed out the bad leaders. But especially in small organizations, leaders may be able to figure out which direct reports criticized them; as a result, fear of retaliation keeps direct reports from responding honestly. While it’s not much comfort, I have found that leaders who take credit for their subordinate’s work may succeed in the short term, but ultimately the best people leave the team and the leader’s reputation suffers.

Some direct reports have been able to increase their visibility without their boss’s intervention by making presentations about their work at industry conferences. But a controlling boss may demand that conference presentations be pre-approved, effectively blocking that option. In such an extreme environment, it’s probably best for direct reports to refuse to play the Hunger Game. Their best course may be to update their resumes and LinkedIn profiles and look for another company where professional drive has not become toxic.

Conclusion
Being ambitious and competitive can be good traits; it is only when they are taken to extremes without consideration of others that they can contaminate an organization. We have choice over how we behave and where we work. Choose organizations that align with your values and scrutinize your own behavior to make sure you aren’t participating in a zero-sum game where winning means everyone else must lose.